Kathleen Stock, despite backlash, both from fellow academics and from online readers, is a case of halfway-cancelled. She still has an online platform, a career in her chosen field, and a community, despite being heavily critiqued both in real life and in online spaces.

For the sake of transparency, I must start by admitting that I find Stock’s language and rhetoric sickening and hurtful, both personally as a nonbinary person, and simply as ally to trans women, who face the bulk of Stock’s hateful speech. In my opinion, Stock’s language and some of her claims to not match. She says of herself, “I emphatically deny that I am transphobic.” She calls herself a “gender-critical feminist”, although the Internet dubs her and others “TERFs,” meaning trans-exclusionary radical feminists. TERF rhetoric takes issue with trans women in female-only spaces, as they view them as men taking opportunities from women or see them as a “threat to women’s safety.” As Katelyn Burns writes for Vox,

They alternate among several theories that all claim that trans women are really men, who are the ultimate oppressors of women. Most of their ideas — like that trans women are a threat to cisgender women’s safety — are based on cherry-picked cases of horrific behavior by a small number of trans people. Above all else, their ideology doesn’t allow for trans people to have self-definition or any autonomy over their gender expression.


While obviously freedom of speech exists, TERF ideology and associating transphobia under a wing of so-called “feminism” has allowed this form of bigotry to go mainstream and become socially acceptable. Additionally, scholars like Stock use traditional tools of philosophy and statistics to ‘prove’ their ideas about trans women, which may feel convincing, but ignores real experiences and talks over a group Stock herself is not a part of. So, in a trans woman’s words, here are some views on Stock: 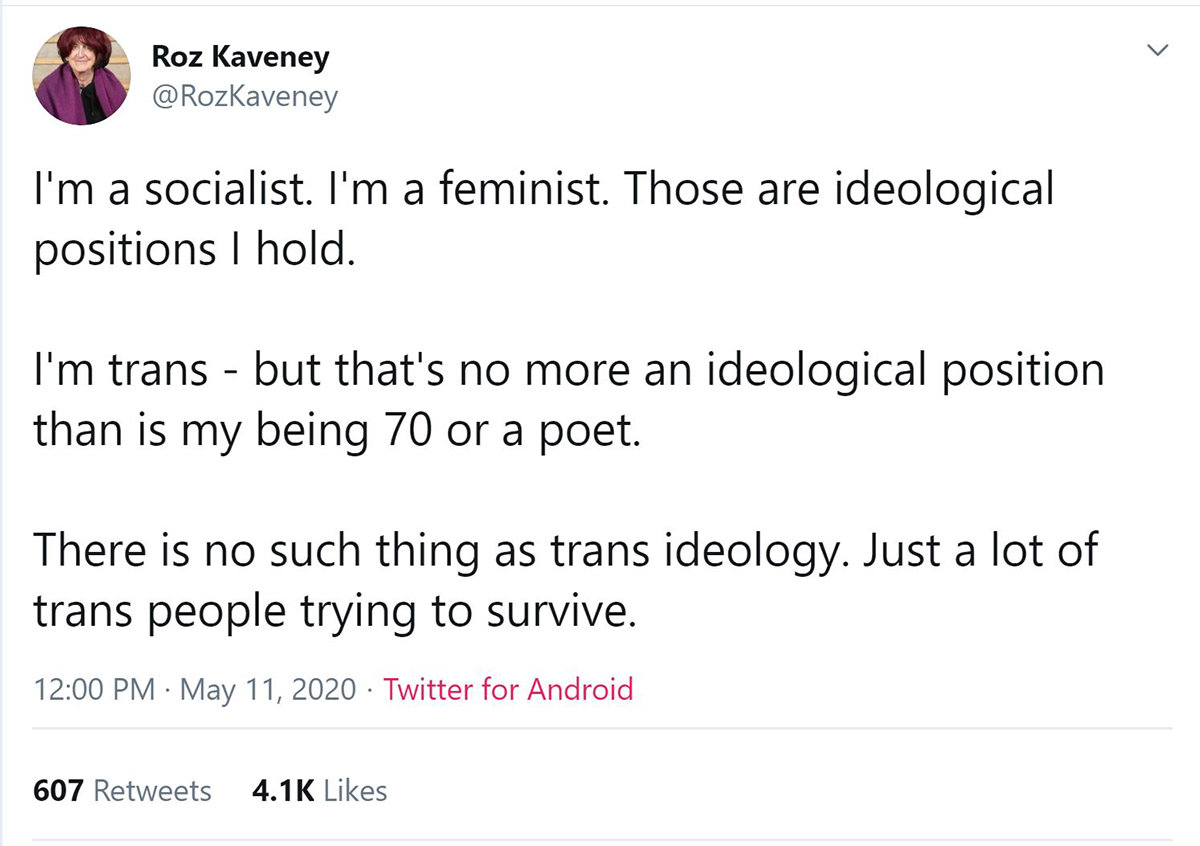 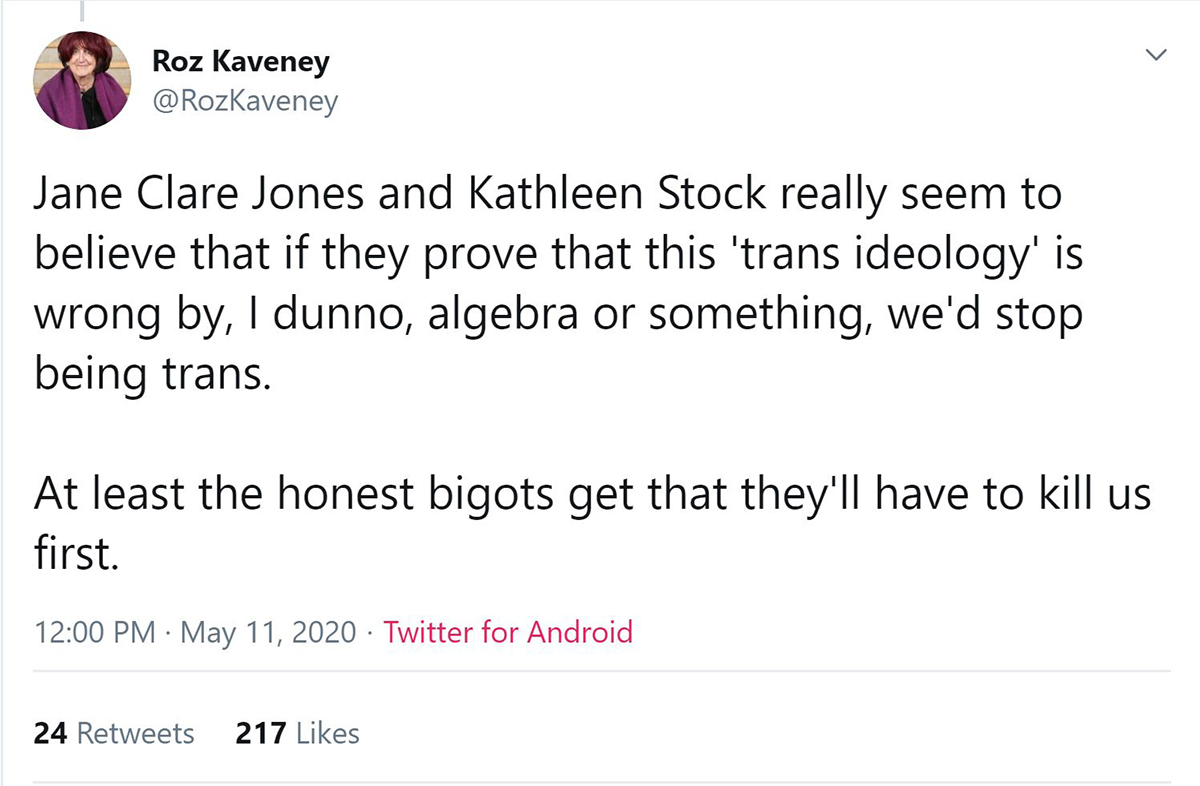 Stock’s “ideology” about trans people seems strange as a concept, especially in 2020, because it's rooted in not believing trans women exist unless they check off arbitrary ever-changing checkboxes for TERFs. Or that they’re allowed to exist, but only in special, designated spaces, not to be placed with cis women. The reality is that trans women face their own set of difficulties in the workplace and in everyday life, not only because they are women, but also because they are transgender. As Julia Moreau writes,

According to the center’s 2015 U.S. Transgender Survey, one in six trans people said they lost a job because of their gender identity or expression, and nearly a third (30 percent) of those who had held a job in the year prior to the survey reported being fired, denied a promotion or subjected to harassment or attack due to their gender identity or expression. Over three quarters of respondents said they had taken steps to avoid such mistreatment at work, like delaying their gender transition or simply quitting their job.


This is important to discuss because it shows why Stock’s transphobic messages are actively hurtful and go against the common sense that gender non-conforming and trans people already suffer in professional spaces because of their gender presentation. Giving transphobic messages a place, under the guise of protecting cis women’s spaces, maintains transphobia in leftist politics in Britain, instead of just in obviously hateful right-wing rhetoric that denies any existence to trans people. As Juliet Jacques writes, “Transphobia, constantly amplified by the country’s mainstream media, is a respectable bigotry in Britain, shared by parts of the left as well as the right.” It’s important to understand this British perspective when looking at the ways that Stock has been cancelled.

Stock was expected to give a seminar at the University of East Anglia in January of this year, which was cancelled after “threats of protests from transgender activists,” with the university claiming it was because of “security and health and safety issues.” The university said they would rescheduale it if a transgender speaker spoke the week after Stock, as well as if they relocated to a more fitting venue for her safety and a potential crowd. I found this real-life cancellation interesting because of how it differs from how CSU would handle this/have handled controversial speakers in the past. I think refusing to let the speech happen, because of protestors, shows the school’s fear of perhaps counter protestors or a confrontation, because likely peaceful protestors shouldn’t be a large issue for a decent-sized university. This situation is also interesting because we won’t probably ever know if they were planning to reschedule her, or if, like she thought, she was being permanently cancelled but “they can’t say” that. I’d like to think that if COVID-19 hadn’t closed down everything, this may have been an opportunity to create some dialogue in an academic space.

This cancellation is part of a larger debate between academic “gender critical” speakers and universities and publications, which have shut down several planned talks after recieving backlash from pride groups and trans activiists. Much of this discourse originates online in articles and more formal online written debates. While articles by scholars may gain traction and views, there’s an online informal underbelly to this discourse as well, taking place on Twitter between TERFS (or “gender critical feminists”) and trans activists/LGBT people/concerned professors and teachers. Her supporters seem to have a reputation to go after people who disagree with her or call her transphobic (see threads linked below), although I’m not sure how normal that is on Twitter, as it’s not really my social media site of choice. Either way, I think overall there is a split between academic papers, where writers try to have at least a semblance of respect for each other, and online discourse on social media where slurs are thrown around and disrespect is the only common thing on both sides. Here are some Twitter threads about this: from a teacher, and from other perspectives. The comments/replies on these Tweets illustrate the divide between people on these issues.

I think Kathleen Stock’s cancellations in real life are giving her even more of an online platform, as she can call herself a victim of PC culture and call censorship because universities are concerned with keeping their students feeling safe instead of encouraging dialogue that may be harmful to trans students and staff. It’s also an disheartening look at how transphobia is still clearly in our mainstream, even within certain “feminist” and left-leaning groups. Academics like Stock, and those who look at trans experiences in data sets and cherry-picked violent crimes, work to deny the autonomy of millions of individuals, and knowingly or not, encourage others to be more blatant with their disrespect and bigotry.